City hopping to Amsterdam and then waking up in Rotterdam… who would’ve thought?

Just a few pics from last night. After work we will be on our way back to Amsterdam where we will spent the weekend.

A sneak peak into my little morning walk-about in town, waiting for hubby to finish his business. Autumn is here and it holds a different kind of beauty.

Okay, so scooters without helmets is a thing… bicycles like no other place and… declaration forms to confirm you don’t have Covid-19 or been in contact with anyone who does (too your knowledge). This is how it’s done here in the Netherlands .

And then we left back from Rotterdam for Amsterdam to spend a weekend of pre-birthday celebrations with my husband.

Upon arriving in Amsterdam you can’t help noticing all the bicycles. Let me say that again… thousands and thousands of bicycles with it’s own bicycle parking garage by the central station!

Seemingly just about everyone here rides a bike. It is not unusual to see mothers, grandmothers, business people, police officers, old and young hippies, and so on happily bike along. Some people walk their dogs by bike. Others use it to bring home groceries, flowers, furniture, children, girlfriends or anything else one can think of.

As of 2017, 68% of traffic to and from work or school is by bike, and bikes account for 36% of all traffic movements in Amsterdam. In fact, it was long said that the 811.000 people who live in Amsterdam own an estimated 881,000 bicycles. In other words, there are more bikes than residents. Statistics being what they are, no one knows for sure, of course. Suffice it to say that in a city built for pedestrians a bicycle is the most logical form of transportation.

Bikes come in all shapes, sizes and colors. A group of alternative artists in Amsterdam North custom-welds two or more bike frames into fantastic creations that have its riders tower high above the road. Young urban professionals tend to like purpose-built bikes – such as models designed to carry two or more children. 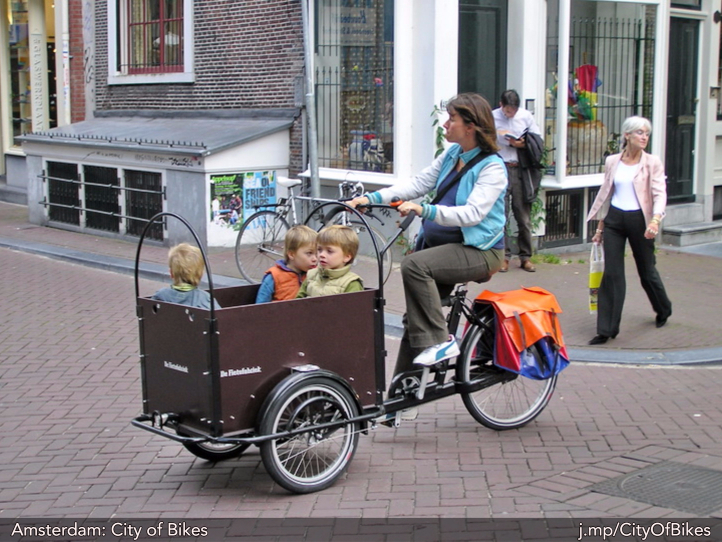 A cargo bike double as a school ‘bus’ in Amsterdam. Others prefer the classic cargo-bikes, which can be used to transport large pieces of furniture or the contents of a small room. Matter of fact, nowadays more and more business deliver their good using purpose-built bikes. Postal firm PostNL delivers packages by electric bike carts, and supermarket Albert Heijn, brings groceries to your home using electric cargo bikes whist  the old-fashioned so-called ‘grandma’ or ‘grandfather’ bikes are sought after by those with a sense of history.

And as the saying goes, if you have not gotten lost in Amsterdam, you are doing it wrong. Our Saturday morning stroll turned into 11 km detour, cause here, you get lost without even trying. Saturday turned to a lazy rainy Sunday visiting pubs and restaurants before we took the direct fast train back to our hotel in Rotterdam.

The local pub EXCALIBUR, off cause, got our special attention!

Technology, globalization, and constant change have made the job of leading businesses more exciting, complex, and demanding.

Majohi aim to assist you with a customised “Innovation Toolkit,” to design a flexible innovation process for online integration, to adapt to, and profit from, changes in customers, competitors, or markets.